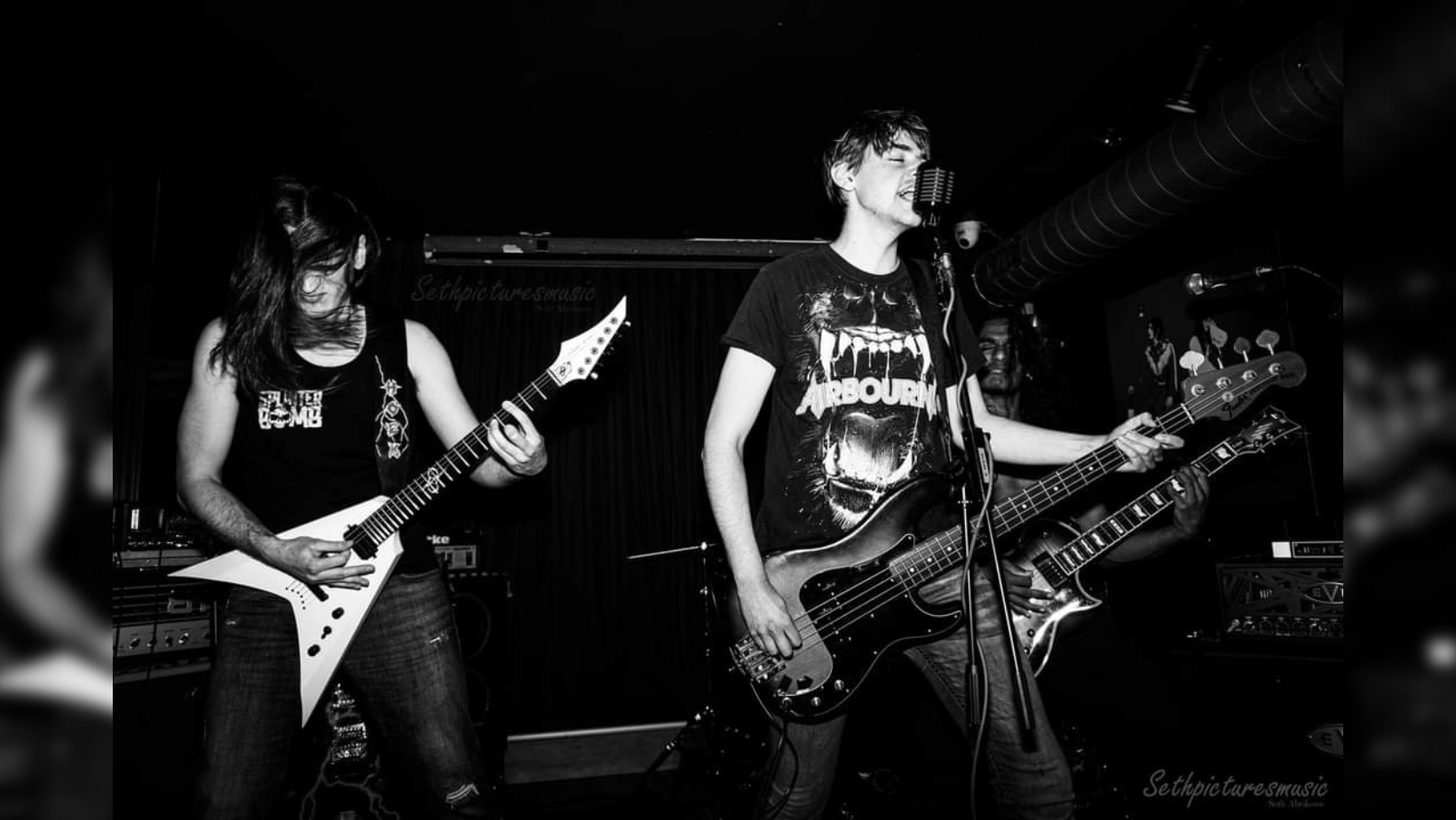 ‘We are the fucking frontiers, so the limits will be reached’

This fragment from their song ‘Barrier Breached’ is something that the band certainly lives up.
The Frontiers are known for their energetic live performances, in which they like to party hard.
To these guys from Rotterdam there is nothing better than playing their signature Heavy Rock ‘n’ Roll music.
The power quartet consists of loud frontman, singer and bassist Tim van den Bogaerdt,
fast lead guitarists Thijs van der Sluijs and Dennis Hoek, and pounding drummer Rik Lamers.

The band was formed in 2012 at school as a coverband. Not satisfied with only playing covers,
the band started writing original songs in 2016. They have since played big stages as Baroeg, Bibelot, Podium Victorie,
Merlinpop, Spijkenisse Festival and Metropolis Festival. In 2020 the band recorded and released their first record ‘Barrier Breached’.

The bands also has been busy writing, recording and releasing new music.
2022 saw the release of four new singles, being D.M., Circles (Part I), Rebound and Volcano.
These songs have become an essential part of their live shows.

Near the end of 2022, Rik and Dennis joined the legions. This new line-up is eager to hit the stage and perform again!

The Frontiers are inspired by bands such as AC/DC, Metallica, Judas Priest, Foo Fighters, Motörhead and Iron Maiden.

Always ready to play, they are guaranteed to kick some ass.
Earplugs are advised, because the volume will be turned up to eleven and the ceiling will be blown off!

Tim van den Bogaerdt is a 22 year old musician from Spijkenisse, The Netherlands. He is active as co-founder, lead singer, bassist and acoustic guitarist for The Frontiers. Besides writing and releasing music with The Frontiers, Tim makes music for his solo project as well. His solo album “Beating Hard, Bleeding Heart” released in December 2020 and Tim is planning on releasing his new song for his solo project in 2022.

The singer has also been involved with numerous events like Spijkenisse Festival through the music platform Puls located in Spijkenisse.

Next to music, Tim is in his third year of studying Technology, Policy and Management at the Technical University in Delft and loves to get lost in working on a project. Whether it’s building a new bass guitar from scratch or creating new music, Tim takes it head on and gives it a full 200%!

As a young, nervous musician with four years of bedroom practise under my belt, I had the opportunity to play my first show at theater “De stoep”.
On that faithful night on the 13th of february 2014, I met Thijs and found that we were going to share the stage.
We hit it off and less than a year later we co-founded my first band “De vage kerels”! I met Tim shortly after during another show, where our band shared the stage with the Frontiers!

Over time music continued to bring us together at the best concerts and festivals.
I’ve seen the three of us grow into driven, passionate and well-rounded musicians. It is now eight years after we first met, and we finally get to join forces once more!

With you our line-up is complete. A line-up full of passion, experience and a hint of insanity.
Now there is only one thing left to do: Conquer the world!

Thijs van der Sluijs is the lead guitarist and co-founder of The Frontiers. Now 21 years old, he picked up the guitar at the age of 7, playing everything from blues to death metal.

Besides being heavily inspired by AC/DC and Angus Young, as can be seen by his red Gibson SG, he is influenced by guitarists such as Glenn Tipton, Satriani, Brendon Small and Chris Caffery. When it comes to stage presence, Thijs takes inspiration from Airbourne and Judas Priest.

Thijs is also the lead guitarist of progressive death metal band Phlebotomized. When not playing or talking about music, Thijs mostly talks about craft beer and his study Criminology.

Rik Lamers is a 25 year old drummer from Eindhoven (Netherlands) and has been with the band since 2022.

Heartloving to play music and share it with the world. That is what he wanted to do when he sat behind the drums since the age of 11. Playing drums is his best form of self-expression and cannot imagine life without drums. We are really excited to have him on board as our drummer.

Being influenced by countless metal and hardrock bands he sure is not affraid to hit with full power. Besides playing drums for The Frontiers you can also find him doing sessionwork and teaching drums.